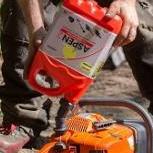 It's time to wake up - and switch to Aspen Fuel