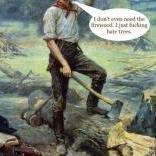 Lone working and safety in forestry