Asked by Rob the renter

Just moved into a farmhouse with lots of garden and lots of trees, which I love.

We are renting (hence the username) but we are probably here for the medium to long term and the landlord is a large agricultural & food business that doesn't seem to be too bothered about the grounds - some of the bushes and hedges have been allowed to get seriously out of hand and the old & very beautiful fruit trees dotted about the lawns that carry ample evidence of careful pruning in their youth have been running wild for a few years - I'll leave them for another day though. I want the gardens and small mature spinney to both be and look well tended, and to leave them in a better state than I found them when we eventually move on.

My main job at the mimute is to get the border back in hand. A few years ago it was a 7 foot high hedge interspersed with mature trees... now... 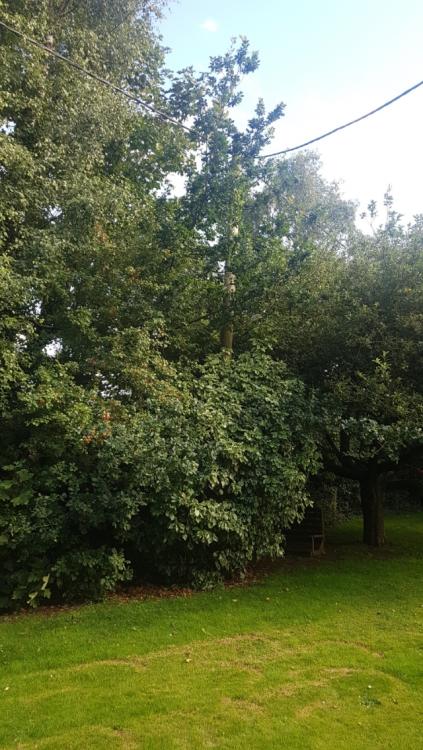 Buried in amongst this little lot, reaching just to the top of the Telegraph pole and stood just to the left of it is a young oak tree... the only one on the property or indeed in the vicinity. There's a mature silver birch and a mature sycamore about 8 feet apart behind it, and the base of the oak is only a couple of feet from the latter & the Telegraph pole.

The restricted space has lead to the trunk growing towards the lawn and very little lateral growth - it's simply shot up straight and thrown a single long branch out over the lawn... 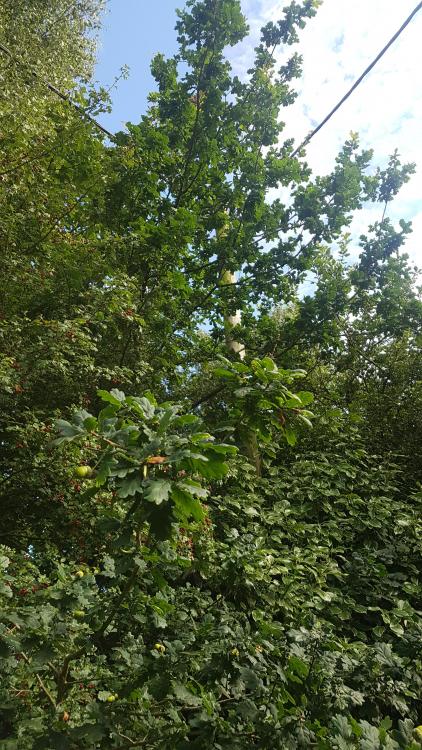 The trunk is about 6 inches diameter. What should I do with it?

I love Oak trees, but its picked about the worst place possible to grow.

Has it gone too high to be brought into the hedge? I don't mind clearing back a load of the Ivy and overgrown bushes choking the first 8 feet of vertical space around it. The garden is south facing and it could get plenty of light if the Hawthorne next to it was brought back to hedge height, the bushes removed and the ivy pruned back hard.... but I'm worried it will die off if I simply lop 2/3rds off in one go? Should I plan to get it back down over a couple of winters?

I expect it's far too big to be transplantable without serious equipment  (ie bigger than a mini digger) - Correct?

6 answers to this question