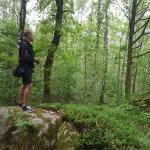 (Arboricultural-styled) 'Fact of the Day'

By Kveldssanger, August 9, 2015 in Training & education