By David Humphries aged 48 and ¾

I often read and see with great interest (and with more than a tad of jealousy), the various exploits of the host of climbers both young and mature that gallivant around the northern and southern hemisphere,  exploring & climbing some of the world’s oldest and tallest tree specimens.

The majority of my own humble climbing career took place in and around London during the 1990’s when we were still battling both the tree and the climbing equipment to get up & into the canopy. 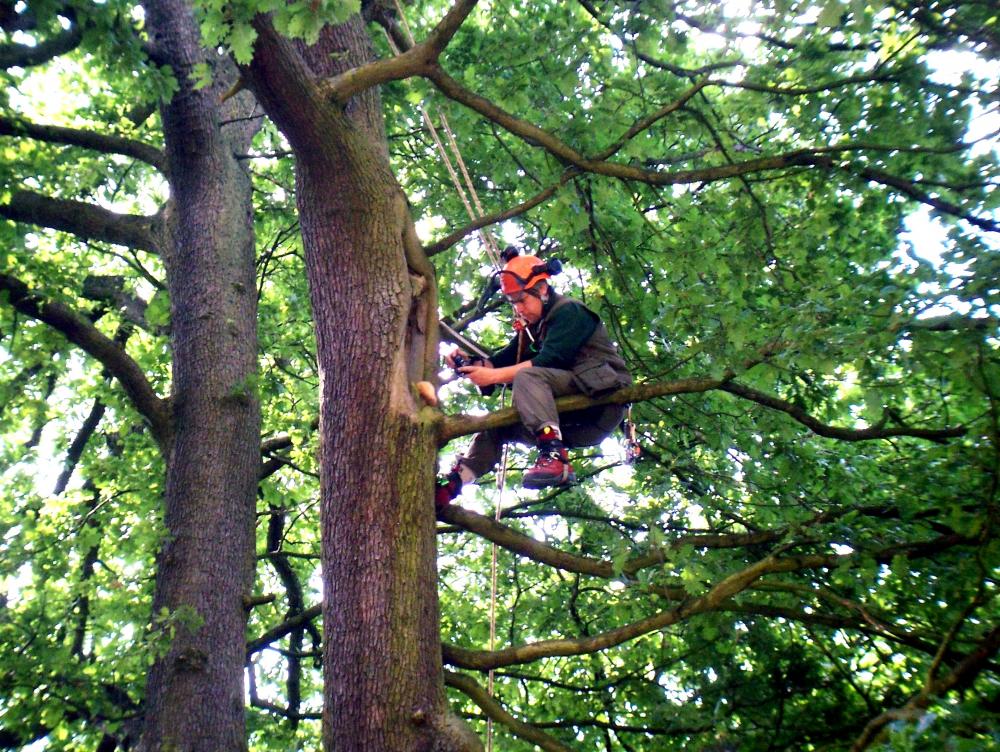 I moved away from climbing on a day to day basis into a supervisory/management role (something I’m starting to regret if I’m honest, as it was a bit too early) and have ended up as the Trees Management Officer for the City of London Corporation looking after the (20,000) tree population at one of London’s finest Open Spaces – Hampstead Heath.

I continued climbing by playing around the rocky playgrounds of the south coast and cairngorms, but even that time came to an end due to family commitents. 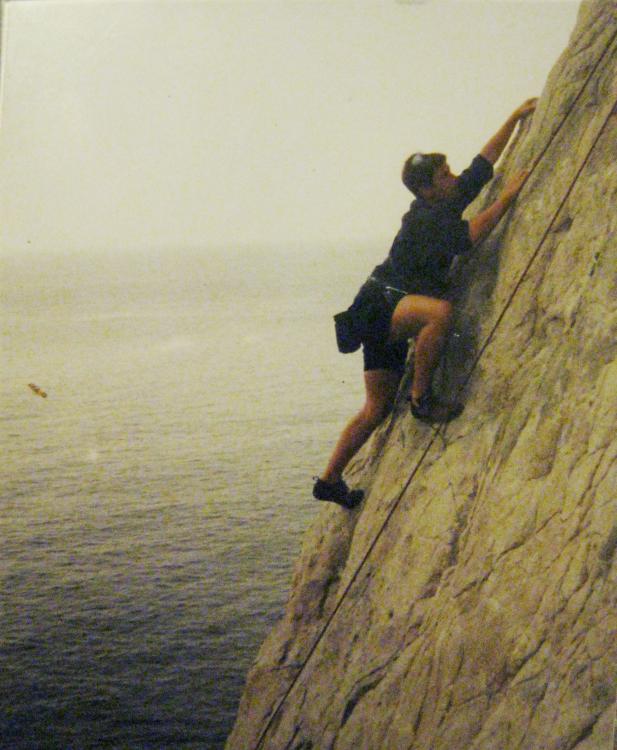 My interaction these days is more around the managing and organizing of climbing works on mature, veteran and ancient trees rather than clambering about them. Although I still get the itch to pull a harness on it seldom materializes and pretty much has become in reality something I used to do rather than something I actually do.

So when an opportunity came knocking in 2009 to have a week of climbing in the Basque region of Spain to learn from and assess/measure lapsed ancient Beech pollards for a Conservation Arb project, I pulled rank and jumped the queue in the team (much to the annoyance of some of my colleagues) to offer up my rusty climbing skills for the cause.

I borrowed a tree motion and learnt a few (new to me) friction hitches to go with the hitch climber (again, new to me) to help me get back up amongst the leaves.

The trip was organised by Helen Read (Ecologist/Conservation Officer at Burnham Beeches) It was part of an on-going European wide study she had undertaken looking at traditional and sustainable pollarding practices and an opportunity for a group of Ecologists and Arborists from the City of London, together with a couple of members of the Ancient Tree Forum, to climb, record and evaluate regrowth and failure of a number of trees that had been worked on three years previously using a trial of experimental pollarding techniques carried out by a collaboration of Spanish, Swiss and British Arbs. These techniques included using both axe and chainsaw and cutting the lapsed poles at various heights. 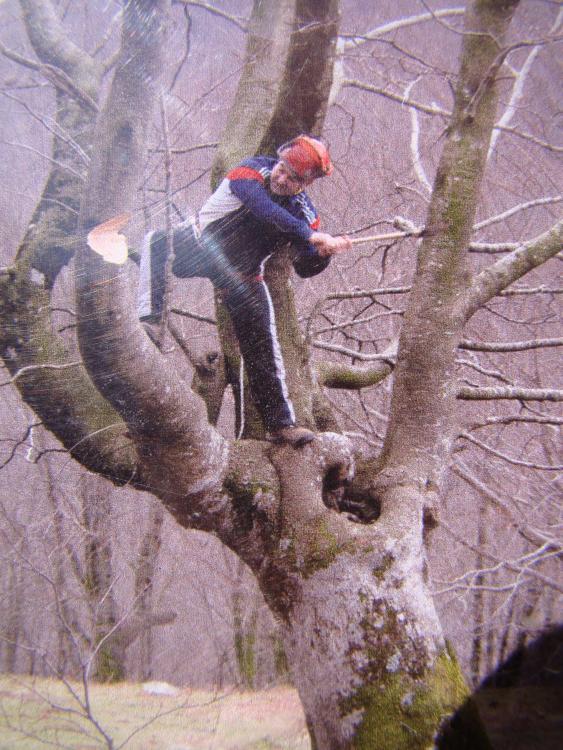 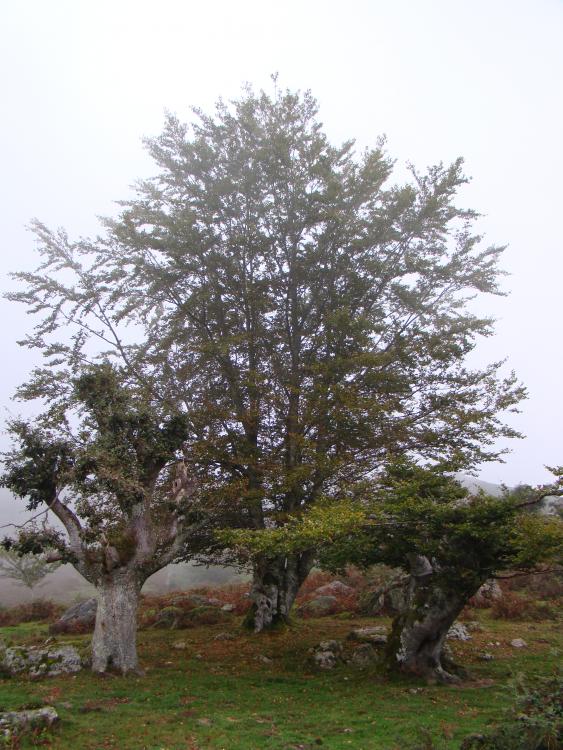 The data would hopefully build a blue print of how and when to return very old lapsed pollards back in to cycle, to a state where vitality is enhanced and self-destruction via decay and biomechanical stress was mitigated.
The Ecological importance of these trees continuing to be being maintained, both in mainland Europe and back here in the UK is considerable. They support the micro habitats of a vast range of fungi, lichen, invertebrates, mammal and avian life with many of these being the on Red data lists of threatened species.

The trees themselves were spread across large tracts of hill and lower mountain side on common pastures and traditionally used for domestic fuel or as wood for charcoal used in the coastal iron foundries. Some were also shaped to provide particular curves and forks which were used in ship building. 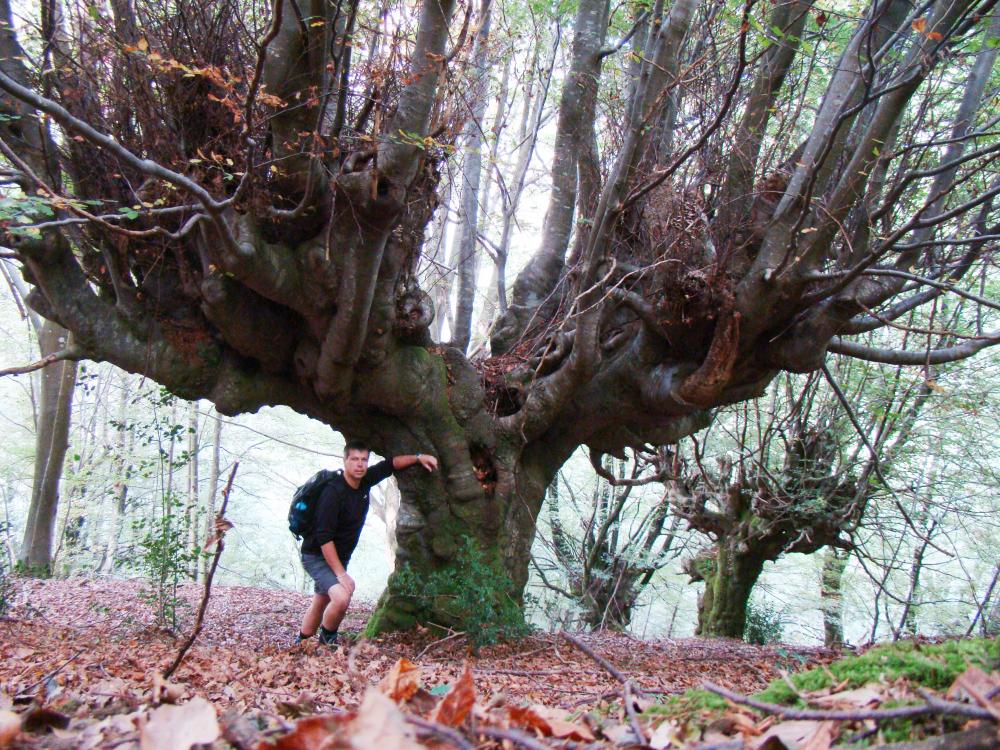 Most UK pollards have been lapsed for over a hundred years but the pollards in the Basque have been more recently cut and there are still people around who remember how & when to cut them.

Meeting one such local was a privilege and inspiration and has left me with a far deeper understanding of mans’ place in nature.

We travelled down to the Basque country by train via Paris and spent a week between the two sites of Oieleku and Leitza.

Stunning areas of natural beauty! My camera was never out of my hand. 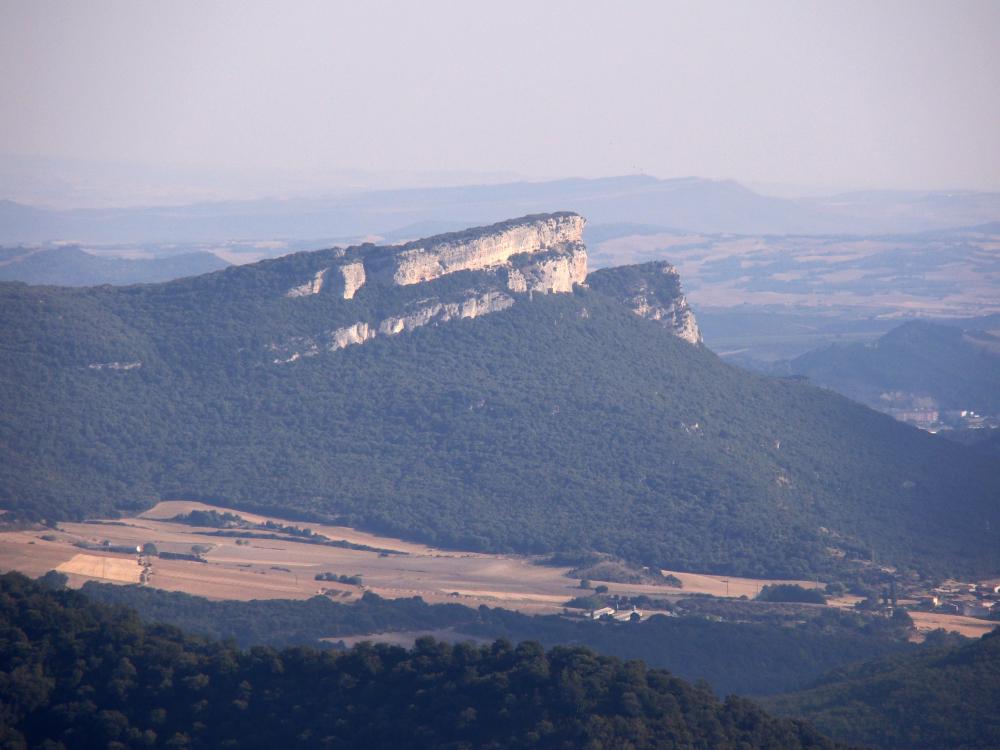 We had a little bit of R&R involving site visits fung’ hunting and imbibing the local fuel but were mostly focused on the task at hand. 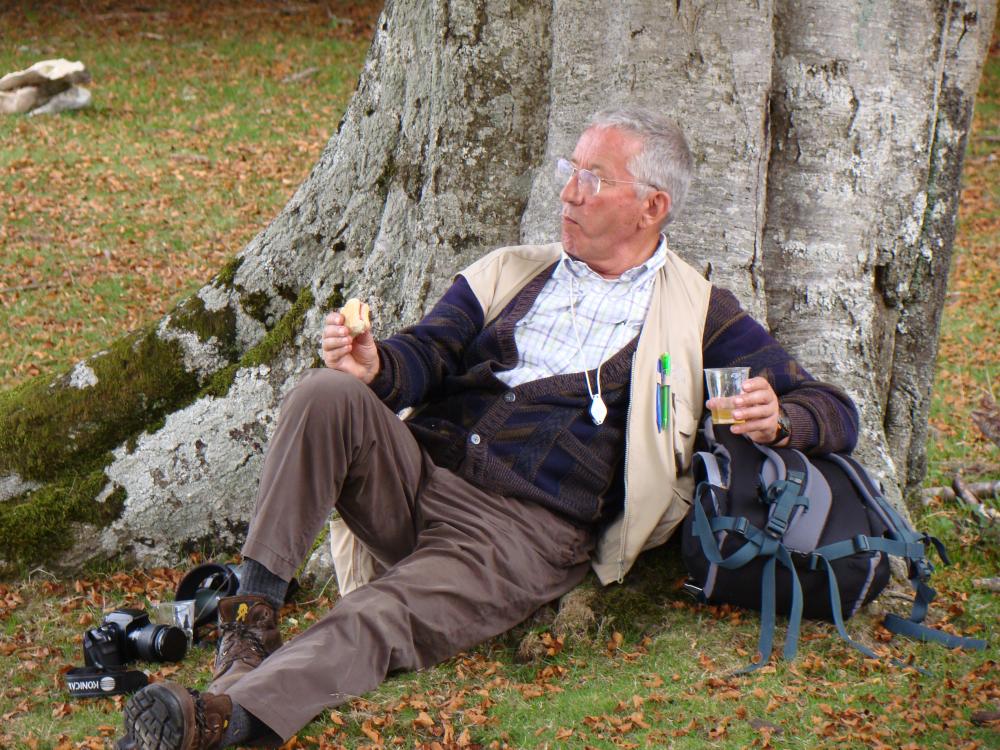 Splitting into teams of climber and recorders, we climbed the 40 pollards that were cut a few years before. Due to their history and nature they were not monster trees in any imagination, the majority being stumpy old gnarly things but a few were around the 50/60’ mark. The climbing was interesting

as the roots and trunks were significantly decade and structurally compromised. We were also mindful not to break any of the newly formed epicormic and adventitious shoots. The old cut stubs were sometimes covered with a moss mat to protect them from the sun and drying out. Rock Lizards had made their homes under these and the loose bark and cavities had resident bats. 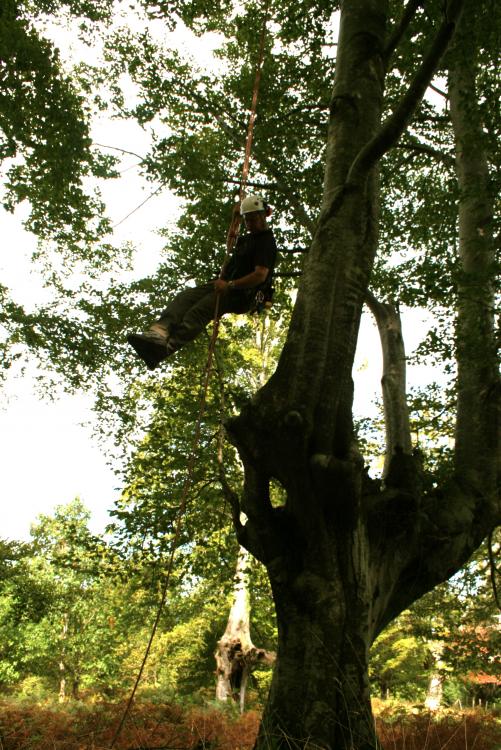 We recorded and measured if the branches were alive or dead, number of eruptions of new shoots, length of extension growth from terminal bud scar and whether the stubs were showing callous, and how far below the dead stubs if there was any live cambium. 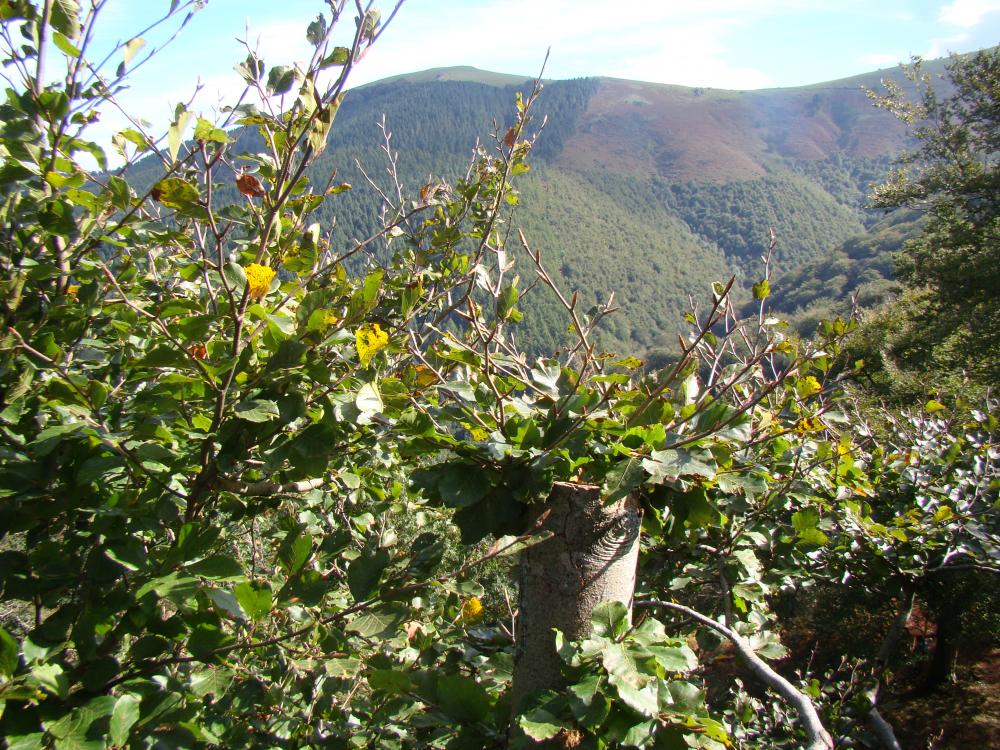 The data was sent off for collating to a UK University and the findings were published in The Arboricultural Journal in January 2013.

Lots of variables, but if time, vigour and expense allow,
then ‘gradual’ pollard restoration is the way to go. The less leaf area removed enables the trees to generate more energy and produce a better response from dormant shoots, leading to fewer pollards likely to fail and die. 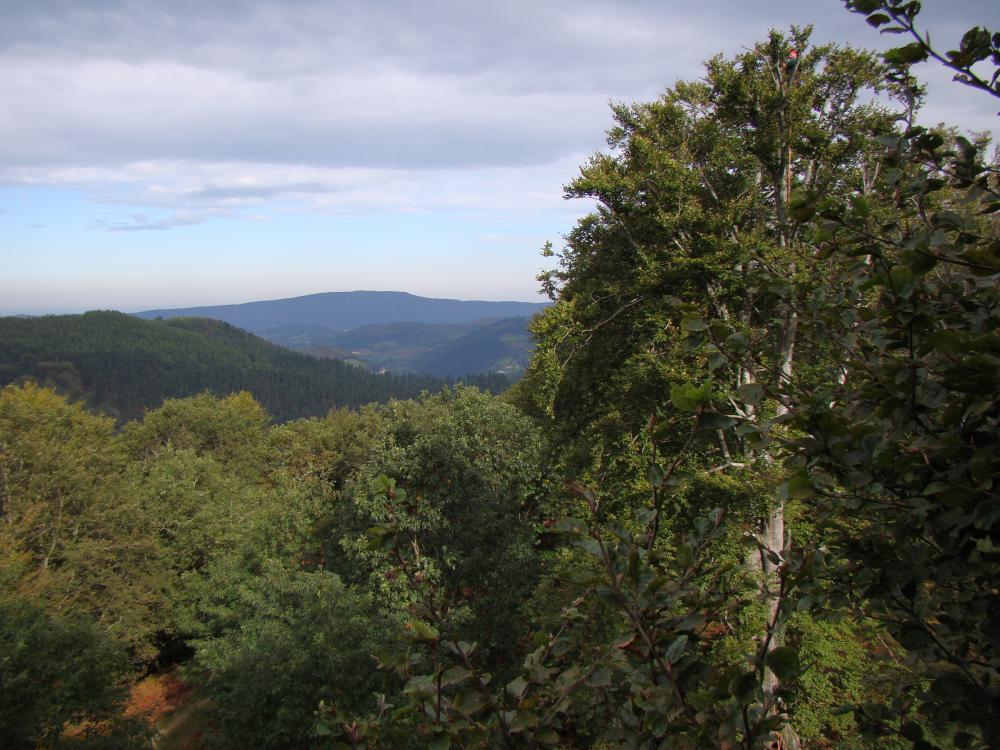 This was a fascinating and inspiring trip to be involved with and opened many doors for me with my own thoughts and experiences around veteran tree management and also gaining access to like minded individuals who are much further down the road to understanding and appreciating tree ecology. I also got to learn a little about the fascinating culture that is the Basque & its people.

I’ve not really climbed much since, (last time was a parting team image for our apprentice, below) There’s been the odd tree inspection here and there, and I know I’ll regret stopping being a tree climber for a living but my passion with trees has taken me down a different path which I still thoroughly enjoy.

The Basque climbs were a nice way to put a full stop at the end of my climbing career and I’ll reflect back on it with good memories. 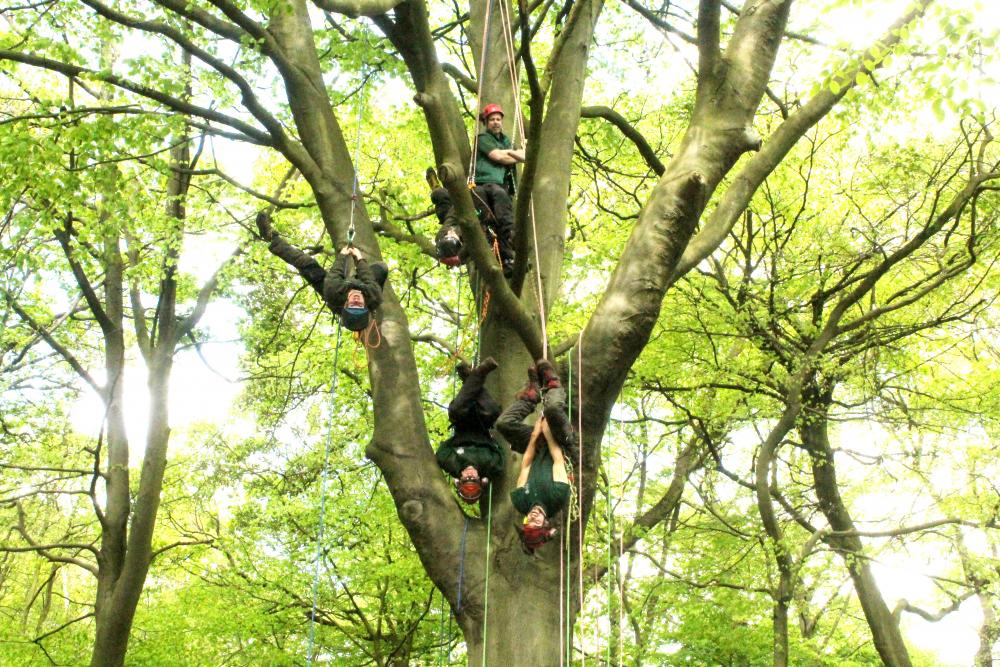 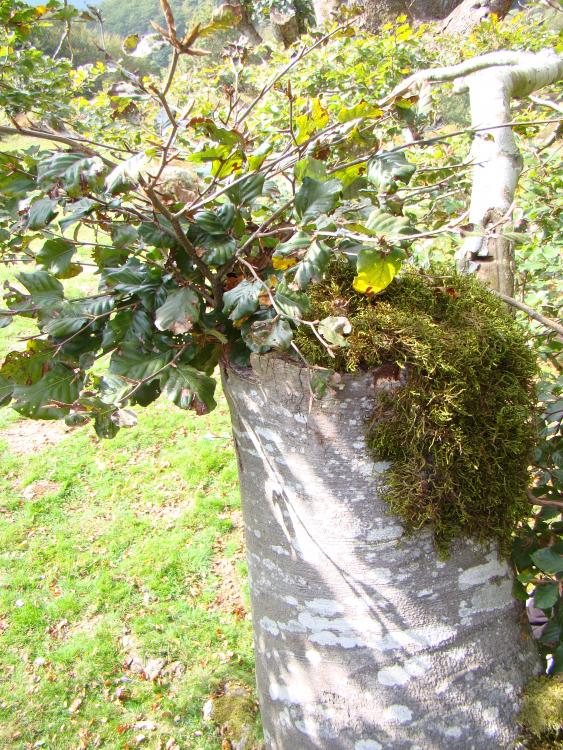