By Woodworks,
June 17 in Arb-Trucks 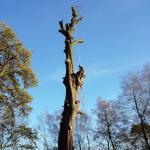 There's always someone able to offer a horror story about a particular item. I'm on my second TD5 Disco 2 auto, been very reliable. Yes the chassis has had a bit of welding, and if I keep it for

2600kg is going to put you firmly in the category of 'relatively thirsty 4x4' I'm afraid.

But Disco isnt exactly economical on fuel either and the 1 and 2 series are getting pretty old now.  Shogun doing Devon lanes rarely exceeds 20mpg, towing digger much less. It is far better at towing