No, you bore the hinge out, common practice. 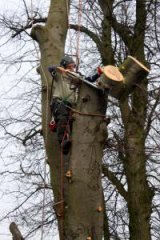 Electronic saws have there advantages, as most people are incapable of adjusting a carb correctly.