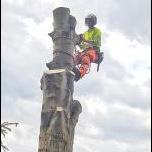 Who's got a small one!