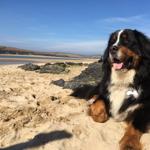 By Bustergasket, March 5, 2019 in Firewood forum